2 ANC ETHEKWINI COUNCILLORS STILL RECEIVES R35,000 MONTHLY SALARY DESPITE THE FACT THAT THEY ARE IN PRISON FOR MURDER. 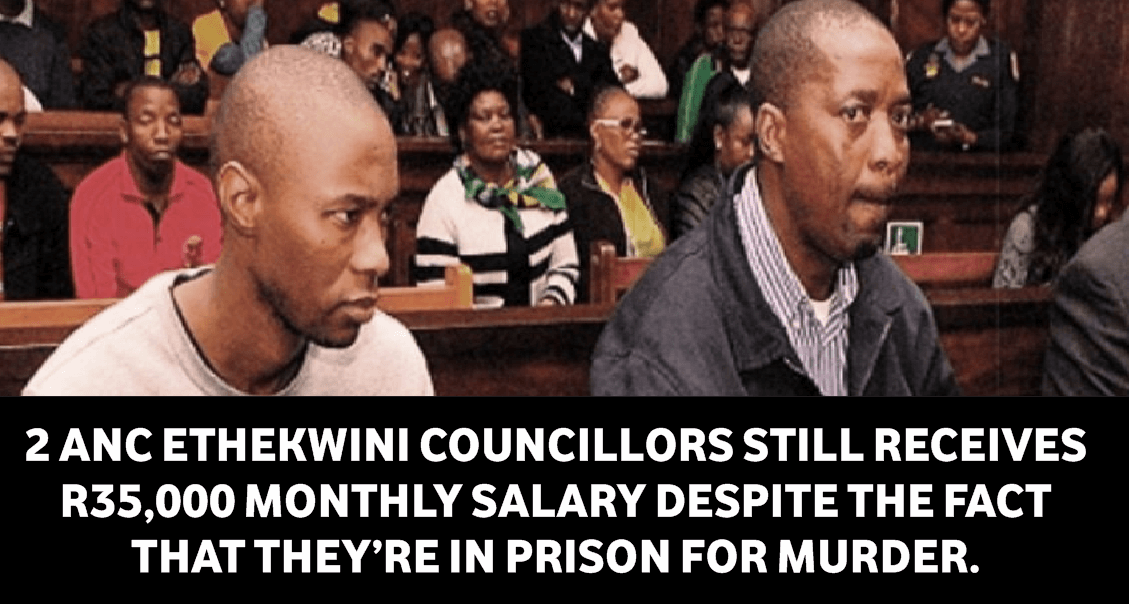 Reports have it that two ANC eThekwini Councillors have been bagging R35,000 monthly pay over a year despite the fact that they are behind bars for murder.

As culled from an IOL report, eThekwini has paid the two almost R1 million in salaries since their arrests.

The ANC eThekwini Councillors, Mduduzi Ngcobo and Velile Lutsheku haven’t carried out any function as councilors since February 2015 after they were arrested for the September 2014 murder of Thulisile Ndlovu in her home.

The Durban High Court Judge, Johan Ploos van Amstel sentenced the Councillors to life imprisonment for the premeditated murder and denied them leave to appeal.

DA provincial and eThekwini caucus leader Zwakelele Mncwango demanded to ‘understand how someone can be convicted and jailed and still reflect as a chairperson of a committee. There’s something wrong there’. Mncwango reportedly stated.

Council Speaker Logie Naidoo nonetheless, refereed Mncwango to the ‘Municipal Structures Act’ which stipulated that council cannot act in such sitiuations until those involved exhaust the appeals processes.

“So in all fairness, no matter how strong we feel about this matter, we are guided by legislation…until that process is finalized…My hands are tied,” Naidoo explained.

Commenting, Labour law attorney Michael Maeso, argued that “due to their imprisonment, (the councilor are) no longer able to perform their contractual obligations and (that) the extent of time they would not be able to be at work would be undetermined because it is not known how long appeal processes would take.”

“Irrespective of the appeals they have lodged” Maeso went on, “questions about their suitability have to be raised.

The employees in a situation like this should remove themselves from the duties until such time as they are exonerated,” Maeso opined.

Ngcobo and Lutsheku are respctively, a KwaNdengezi ward Councillor and a proportional representation Councillor. Together, they were charged and convicted of the aforementioned crime in May.

They are currently serving their sentences at Westville Prison. While we await decision on this issue, ratepayers will undoubtedly, continue to fund the salaries of the two ANC eThekwini Councillors while they pay for their crimes.

As stupid and untrue this may sound... or wait! Let's say it how a very popular American Reality Show would have said it: "BELIEVE IT OR NOT.... BUT IT'S THE TRUTH!"