Keeping you Informed & Updated on the Grabouw Protest Riots

By Clicking the button below, you will be able to view an updated image of the road status.

Keeping you Informed & Updated on the Grabouw Protest Riots

Riot in Grabouw over Housing 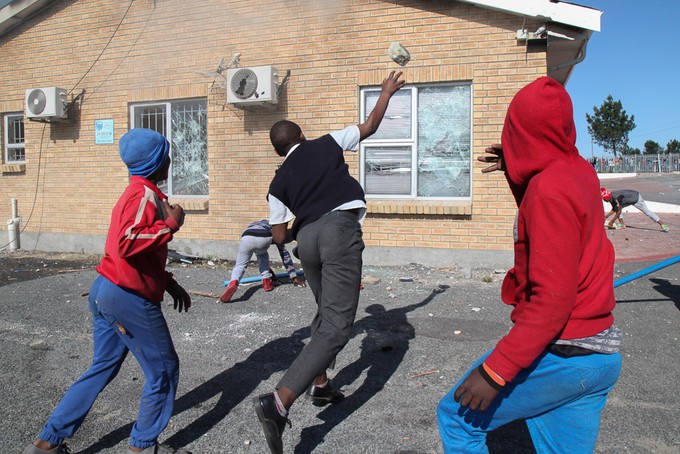 A youth in what appears to be school uniform throws a rock at what’s left of the Grabouw traffic department. Some schools were closed due to the protest.

Thousands of residents from the newly named Siyanyanzela informal settlement and surrounding areas in Grabouw set a vehicle alight and burnt down the local traffic department yesterday. They were protesting evictions and calling for better housing. Residents blocked the main road forcing traffic officers to close down a section of the N2 highway. 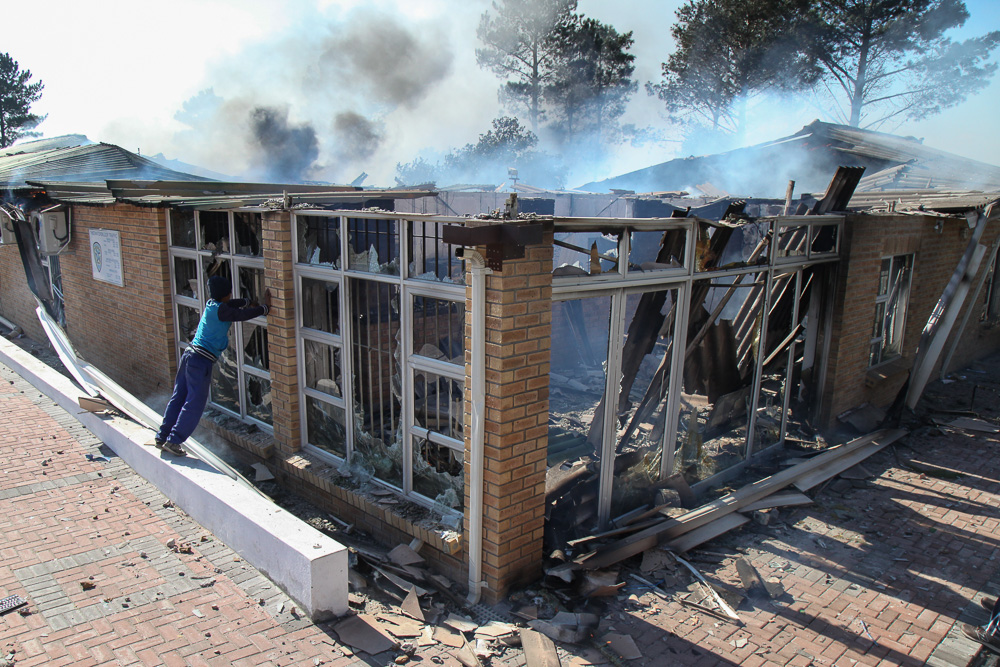 A child peers through the ruins of the traffic station. 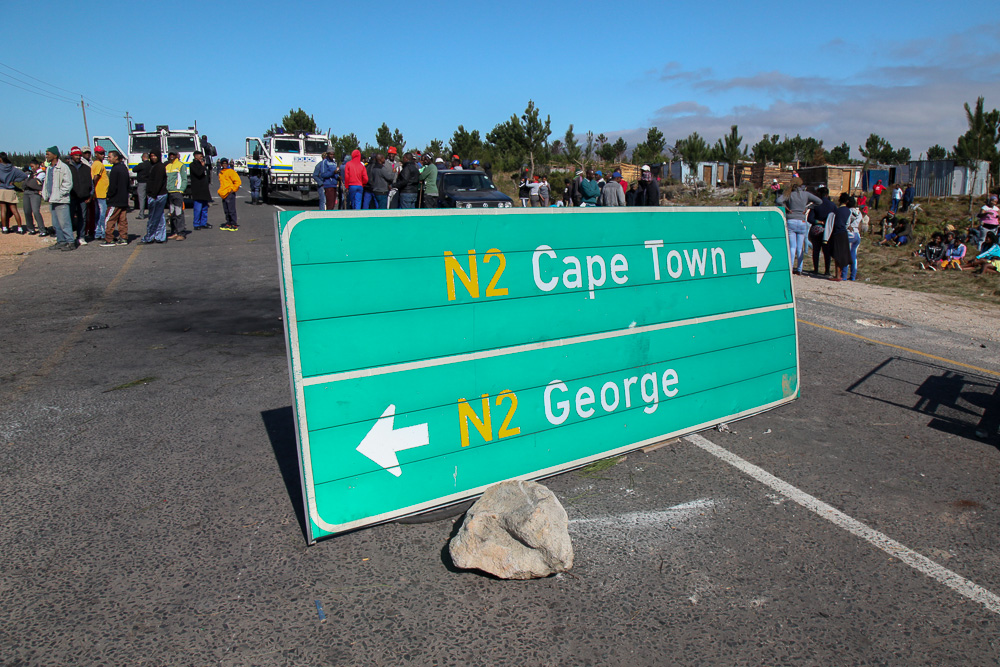 “They are making the demand for proper houses. And those who do not qualify for proper houses, they must get service delivery. They must get water, sanitation and electricity," said Nomisisi Dlathu a community leader and interim secretary of the Ses’khona Peoples' Rights Movement. 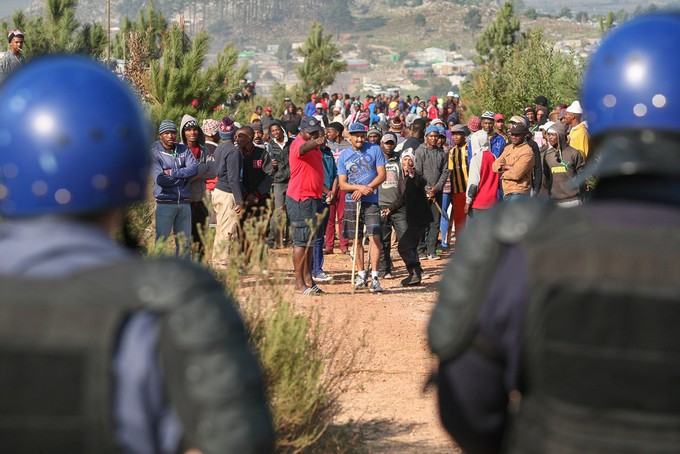 Stand-off between police and residents. 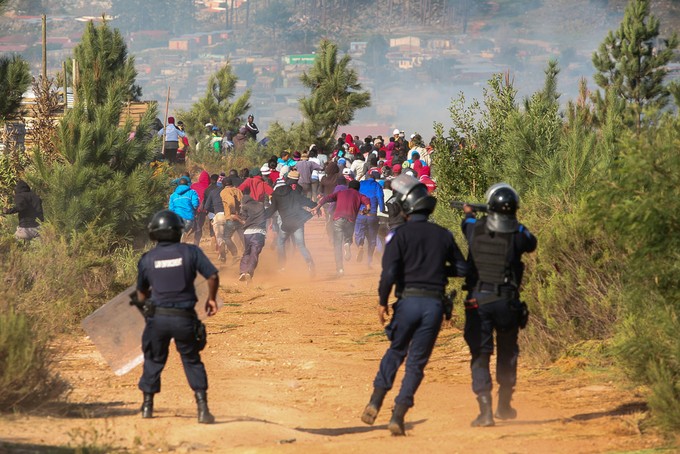 Kula Menzi, also a community leader, said that the municipality set aside the land for houses, but nothing has been done.

But Theewaterskloof Municipality Municipal Manager Stan Wallace told GroundUp, "We are not aware of any promises made for housing other than [what's in] our Budget and Housing Plan ...The number of houses provided in 2015/2016 in Grabouw is 222." He also wrote that the municipality is involved in two further housing projects totalling R36 million, and that the funds for housing come from the National Department of Housing.

It was reported that the protests began Monday evening after residents heard that evictions would be taking place. Land owned by the Department of Public Works was occupied by residents in March. The state then took steps to evict the occupying residents. Despite the protests, the evictions proceeded yesterday. 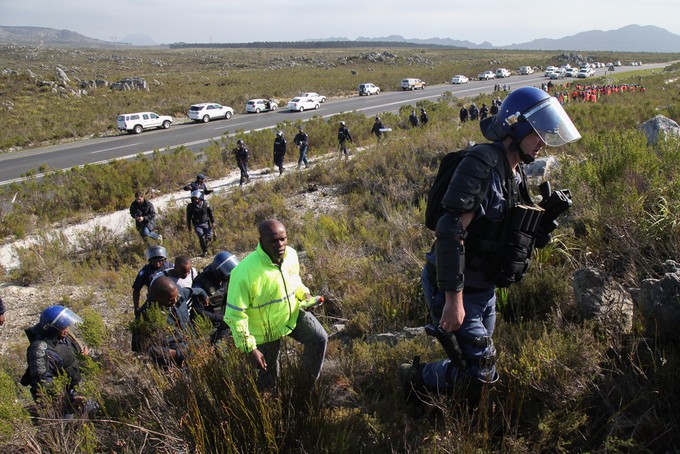 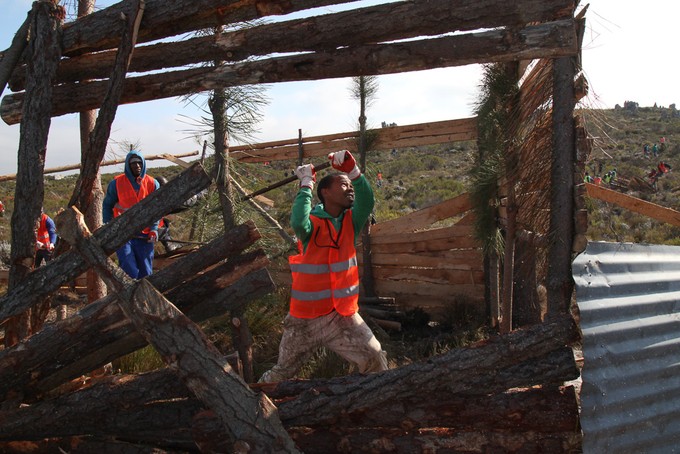 Members of the Ant-Land Invasion Unit tear down an unoccupied shack. 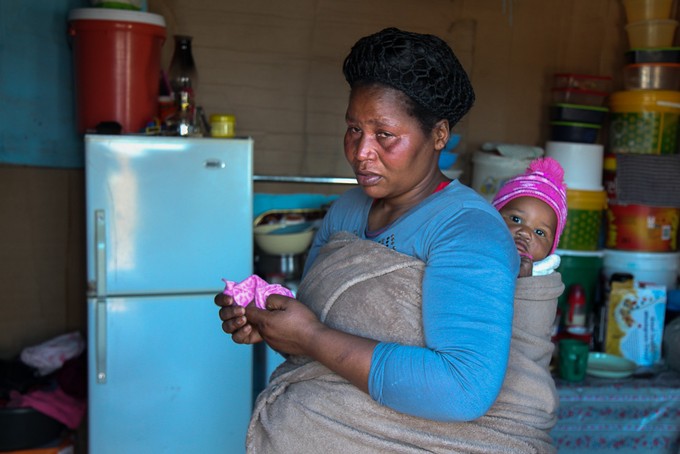 Lindiwe Sihlava cries, while her 11 month old daughter Lubeanzi is on her back. She feared that her shack would be destroyed. She was later relieved that it was not.

MEC for Education Debbie Schäfer said in a statement that three high schools and two primary schools were affected by the protests. "We will come down hard on anyone who wishes to disrupt teaching and learning in our schools and we will not hesitate to lay criminal charges in terms of the SA Schools Act against any person who seeks to prevent learners and teachers from attending school," she wrote.

"I am acutely aware that it is election season and I plead with parents in the various communities to be mindful of the fact that their children are the only victims when we are forced to close schools due to violent protest action," wrote Schäfer. "Quite how violent action and preventing learners from getting an education is going to assist these protesters, is something I cannot understand."

"I also wish to remind all political parties that it is against the law to conduct any political activity in or around our schools during school hours," Schäfer said.

ANC Provincial Executive Committee member Johan Schuurman told GroundUp that the situation in Grabouw was difficult for the protesting people because there was no water, sanitation and formal housing for them. "The only way we can resolve this situation is to sit around the table and talk," he said. 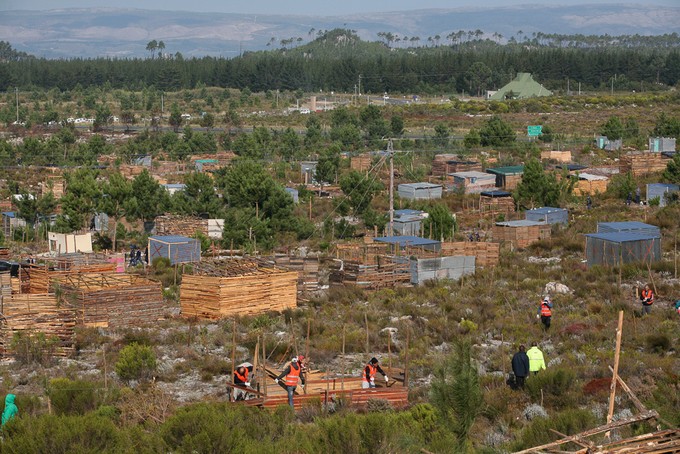 Overview of Siyanyanzela and the occupied land. Members of the Anti-Land Invasion Unit can be seen.