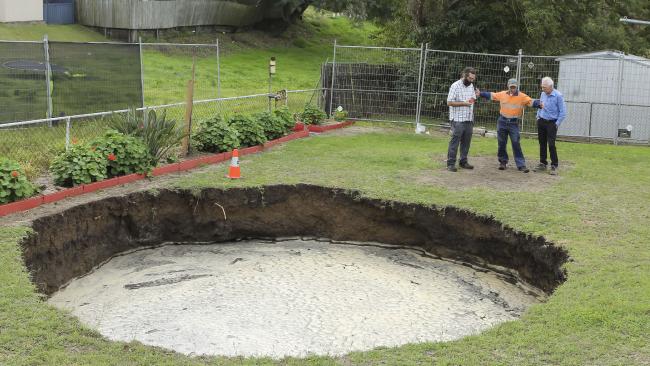 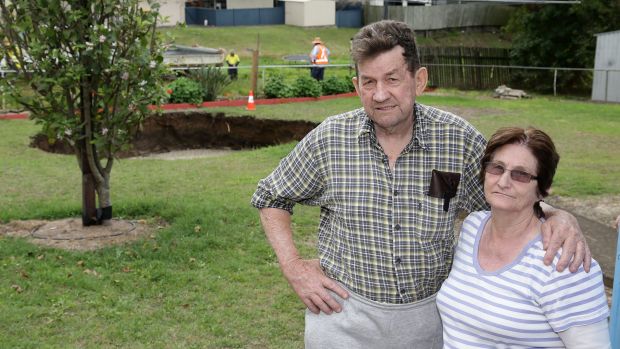 An elderly Australian couple are being reassured that their house west of Brisbane will not be swallowed up by a sinkhole, after their backyard started to cave in down a century-old mine shaft.

Ipswich Mayor Paul Pisasale has assured owners Lyn and Ray McKay their house will not disappear overnight and engineers are confident of fixing the "sinkhole" which is some six to eight metres in diameter and full of water.

"It will get worse for the next couple of hours. It's an exploratory shaft that goes down about 100 metres and there's no need to panic about a neighbourhood falling in, and we will take all the steps to get Lyn and Ray back in their house," Pisasale said.

Pisasale visited the Coal St home in Basin Pocket on Tuesday where he met with local engineers as well as Lyn and Reg McKay. 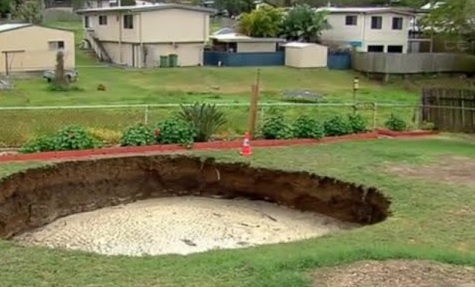 THE ARTICLE BELOW IS FROM JUNE 2010

A giant sinkhole larger than a street intersection has swallowed a three-storey building and a house in Guatemala, as residents reel from a storm that has killed at least 146 people across Central America.

In the north of Guatemala City, the giant sinkhole opened up in the wake of Tropical Storm Agatha, reportedly killing a security guard although local officials have not confirmed the death.

A similar hole opened up nearby last year and residents blamed the sinkhole on a poor sewage drainage system underground. In towns outside the capital, people caked in dirt searched for their loved ones as the stench of mud and sewage from flooded drains filled the air and emergency workers urged survivors to leave ruined houses and go to shelters.

The first-named storm of the 2010 Pacific hurricane season, Agatha hit Guatemala on Saturday, dumping more than one metre of rain in the mountainous west of the country and in neighbouring El Salvador.

"I've got no one to help me. I watched the water take everything," said Carlota Ramos in the town of Amatitlan near the Guatemalan capital.

Her brick house was almost completely swamped by mud.

As the sun came out, exhausted rescue workers hauled away stones and tree trunks from crushed houses as they fought to reach wounded people and find the dozens still missing.

"We just have shovels and picks. We don't have any machinery to dig," said firefighter Mario Cruz, who had been working almost non-stop since Saturday.

Other rescuers walked for several hours along muddy tracks to reach trapped villagers and pull them out of collapsed homes.

At least 123 people died in Guatemala and 59 others are missing, according to the government.

Helicopters ferried tents and medical supplies to remote towns on Guatemala's Pacific coast and the first foreign aid began to flow in on Monday.

More than 94,000 people have been evacuated as the storm buried homes under mud and swept away a highway bridge near Guatemala City.

Central America is vulnerable to heavy rains due to its mountainous terrain, while poor communications in rural areas complicate rescue efforts.