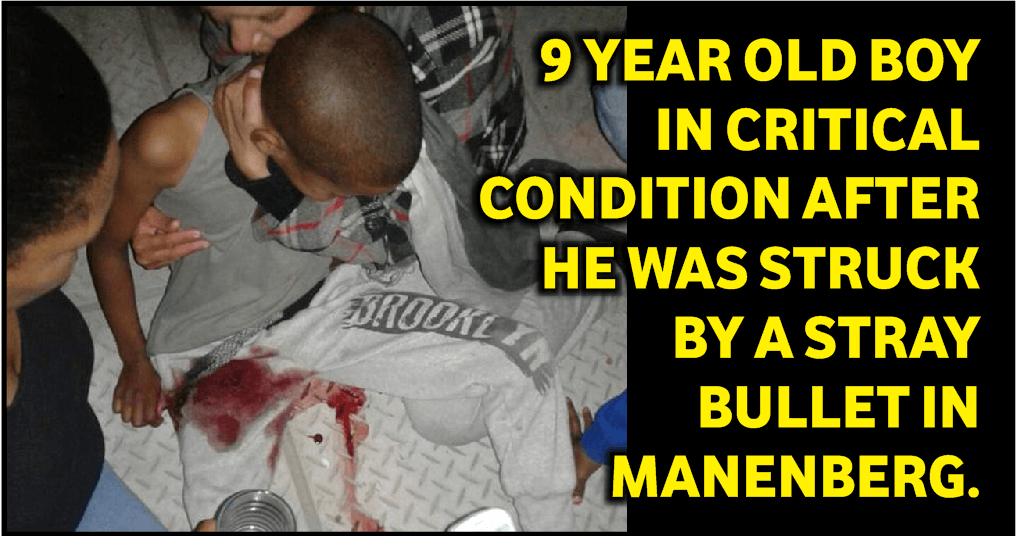 A 9-year-old boy, Rizaar Ariefdien and a taxi gaatjie were shot and wounded and another two men killed as violence exploded in Manenberg on Saturday.

The nine-year-old Rizaar is in a critical condition at the Red Cross Children’s hospital, after he was struck by a stray bullet while the gaatjie has a bullet lodged in his arm after they were shot on Saturday night.

Residents of Karen Court said it was a quiet evening with kids playing in the park when shots suddenly ran out after 7pm. Zahira Vogt, 39, says she stormed out by the back door to get her children, and was greeted by the sight of terrified kids running towards her.

She then ran to the front of the house where her dad was standing at the gate and was stunned to see Rizaar Ariefdien on the ground, blood streaming from his leg as he screamed, ‘Antie, hulle het my geskiet!’.

She says: “I immediately ran for help, getting his family. The bullet went in the back of his right thigh and came out the front. It was horrible to see him bleeding and in such pain.”

Rizaar’s aunt, Cynthia Langley, 49, says they don’t know where the bullets came from, and was shocked to see Rizaar injured.

“We do not know what happened. His mother Raeesa is at the hospital with him. All we know is he is critical because he lost a lot of blood and was in trauma when she last spoke to us,” says Cynthia.

She added Rizaar only has one kidney; he lost the other one when he was a baby because it never developed.

Meanwhile, 35-year-old Kurt Noach says he finished his last trip for the day, and was getting off the taxi next to Karin Court when he was hit by two bullets.

He says the shooters ran off. One bullet grazed his thigh while the other “broke his arm”. “Die bullet sit nog hier,” says Kurt, pointing to his right arm.

Police spokesperson Constable Noloyiso Rwexana confirms two cases of attempted murder were under investigation. “No one has been arrested at this stage.”

Residents say three hours later, two men were killed in nearby Tambo Village. But cops could only confirm the shooting of a 20-year-old victim in Yusuf Road.